(Sorry this won’t embed, but it’s the best TSA clip I could find).

After flying over winter break and waiting 45 minutes in security, I was pissed off. Then I saw this article about some woman getting her cupcake taken away by TSA, and enough if enough.

Let’s be careful, stop people from getting on the plane with explosives, shoe bombs, or whatever. But let’s have some common sense here. A cupcake? What was she going to do, smear the frosting in the pilot’s eyes?

By the way, how long do you think THAT cupcake lasted once the TSA guy got it into the break room? Nom nom nom! 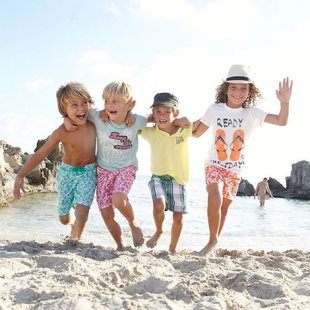 La Redoute, a popular French clothing company, released a promotional ad for their children’s line. The photo, posted on the mail-order chain’s website, showed four kids in colorful beachwear…and a man in his birthday suit off in the distance. The French are notoriously comfortable with public nudity on shorelines; but that may change thanks to this absent-minded mishap.

Yes, that’s what you see. Kids on the beach. A guy. In the water. Naked.

OSLO (Reuters) – The soaring popularity of a fat-rich fad diet has depleted stocks of butter in Norway creating a looming Christmas culinary crisis.

Norwegians have eaten up the country’s entire stockpile of butter, partly as the result of a “low-carb” diet sweeping the Nordic nationwhich emphasizes a higher intake of fats.

“Sales all of a sudden just soared, 20 percent in October then 30 percent in November,” said Lars Galtung, the head of communications at TINE, the country’s biggest farmer-owned cooperative.

A wet summer which reduced the quality of animal feed and cut milk output by 25 million litres had already limited supplies and the shortage has led some pundits to suggest the world’s eighth-largest oil exporter offer some of its plentiful fuel supply in exchange for butter.

“Norwegians are not afraid of natural fats, they love their butter and cream,” Galtung told Reuters.

Butter is now selling on Norway’s top auction website, with a 250-gram piece starting at around $13 (8.28 pounds), roughly four times its normal price.

Silly Norwegians. Nobody can find you on a map, always mixing you up with Sweden and Finland, and now you are running out of butter. Even my man Larry David gets confused sometimes.

She may have ruined Christmas for her second-grade students, but at least she’s sorry.

The upstate elementary school teacher vilified for telling a class full of 7- and 8-year-olds that Santa doesn’t exist has finally apologized for the epic blunder.

Can’t wait to lose a tooth during snack time in her class! I can hear her now “No, just throw that tooth away Jimmy. There’s not really a tooth fairy.”

Come on Jeremy Wade, I have foul hooked bigger rays off the ACK on the Swag Surfer.